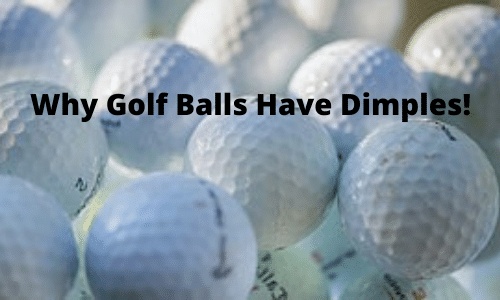 Have you ever wondered why golf balls have dimples?

I know that I have! And I have often wondered why golf balls are not just round and smooth.

It is also interesting that not all dimple patterns are the same.

I have also wondered whether different dimple patterns make a difference to the performance of a golf ball.

Inquiring minds want to know the answers to these questions and I am going to share them with you here.

Well, Why Do Golf Balls Have Dimples, Anyway?

There is a definite science behind the subject of why golf balls have dimples and it is absolutely crucial to golf ball design.

The dimples are an integral part of the aerodynamics of a golf ball.

Tests were undertaken on a golf ball that was completely smooth.

The distances achieved by professional golfers were cut in half.

In fact, there were some tests done by the Titleist engineers to discover just what effect the dimples have.

The completely smooth ball traveled only about 100 yards.

Tests were then conducted on a golf ball that was smooth on one side and had dimples on the other side.

Interestingly, when the dimples were on the right side, the ball sliced to the right and still didn’t travel very far.

When turned over with the dimples on the left – you guessed it! The ball hooked over to the left side of the fairway.

So, when there are dimples on a golf ball, the air flowing around the ball is forced to move into and out of the dimples.

This creates turbulence and air flow over the whole area of the ball, reducing drag and increasing lift.

When this type of air flow is combined with the spin on the ball, trajectory is increased for greater loft.

The USGA ran an experiment to explain the aerodynamics angle of the dimpled golf ball.

Click on the image below for a video of that experiment.

Okay, So When Did They Start Putting Dimples On Golf Balls?

The evolution of the golf ball goes something like this.

Way back in time around the 14th Century, golf balls were made of wood as were golf clubs, which might have been better called golf sticks.

By about the 17th Century a leather sphere stuffed with wet feathers was invented for golf. This was known as the “Featherie”.

There is more info on the progress of golf balls right here.

The next major iteration occurred somewhere around the 19th Century.

It was discovered that the sap from the Malaysian Sapodilla tree, could be dried to create a rubber-like substance, and molded into a sphere.

This was known as the Gutta Percha. It’s name was derived from the Malay word getah (meaning latex) and Percha (also known as Sumatra). The ball was nicknamed “Guttie”.

It was an accidental moment of serendipity that caused dimples to be invented.

The golfers of the time found that when their “Gutties” got dented or nicked they performed better than the pristine new ones.

Thus began the life of the dimpled golf ball.

During the early part of the 20th Century there was a great flurry of research and development from the golf ball manufacturers.

The development of the modern dimpled golf ball, as we know it, had begun.

Does The Size Or Shape of Dimples Matter?

Yes, in fact, all of these things matter They are scientifically designed to give the golf ball both spin and lift.

They dictate how far and how high a ball will fly off the tee as well as in the fairway.

We have told you how even a professional golfer cannot drive a completely smooth ball more than half the usual distance.

Since development of the modern golf ball began, the manufacturers have pursued the perfect dimple!

They have tried round dimples. cone-type dimples, hexagon dimples – they have even tried dimples within dimples, and the research continues.

There is a generally accepted depth for one of these indentations at 7/1000th of an inch. And the experts say that every 1/1000th of an inch equals about 5 additional yards on the golf course.

Is There A Correct Number?

Of equal interest is the question of how many dimples should there be on a golf ball for optimum performance.

There is not a definitive answer to this question, because there are usually somewhere between 300 and 450.

So, I think it would be safe to assume that there should never be fewer than 300 dimples on a golf ball.

As to the maximum, well that would depend upon how many such indentations could be made on a little round sphere!

What a journey the golf ball has traveled!

Starting with a wooden ball shaped by carpenters to the highly sophisticated and thoroughly engineered golf balls we have today.

They can have two pieces and sometimes three or four, with the core, the mantles and the cover all working together to create, hopefully, perfection.

Not only are they aerodynamic miracles, they can also be fashionably colored to add a zing to your golf bag!

I cannot begin to imagine what it would have been like to play with a “Featherie” or a “Guttie”.

Quite frankly, I’m glad that I don’t even have to try.

Had I been born in a different era, I am quite sure that golf would never have become one of my passions!

And anyway, apart from Mary Queen of Scots, women were definitely not allowed to participate in those days!

Thank goodness I was born in the 20th Century.

This has been such a fun undertaking to find out why golf balls have dimples. Gosh! My knowledge of golf ball performance has really increased exponentially!

I am astounded by what I know now. So I do hope that all this knowledge is going to eventually lead to improving my performance on the golf course!

Click on the image above, to go to a discussion of the best golf balls for women. 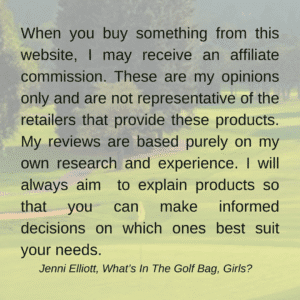